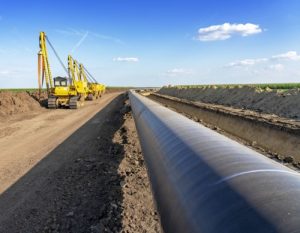 With over 7,000 requests for review per year, the Supreme Court of the United States has its hands full and hears only about 100-150 cases in a given year. One case that recently did not make the cut was an appeal submitted by the operator of the Dakota Access Pipeline (the “DAPL”). The operator appealed to the High Court seeking avoid additional environmental review of a pipeline section that runs under an artificial lake that is supplied with water from the Missouri River. The DAPL has been heavily opposed by Native American tribes who use and consume the lake’s water on a daily basis.

The DAPL is a 1,172-mile-long underground oil pipeline that begins in northwest North Dakota and continues through South Dakota and Iowa to an oil terminal in Illinois. The DAPL was announced to the public in 2014 and informational hearings for landowners took place shortly thereafter. Construction of the DAPL began in June 2016 and it was officially completed by April 2017. The DAPL became commercially operational on June 1, 2017.

Since its inception, the DAPL was met with strong opposition from Native American tribes due to concerns about the DAPL’s environmental impact. Notably, much of the DAPL runs under land and water sources that Native Americans regularly consume and view as sacred. In addition to the social activism against the pipeline, the DAPL has been embroiled in a long-standing court battle. In 2016, the Standing Rock Sioux Tribe, along with three other Sioux tribes, sued in federal court alleging that the DAPL could break and permanently harm vital water supplies. Notwithstanding the suit, in 2017, the U.S. Army Corps of Engineers issued an easement that permitted the DAPL to cross under portions of the Missouri River. However, in 2020, a U.S. District Court Judge found that the government violated the National Environmental Policy Act and threw out the easement approval pending further environmental review. In particular, the Judge ordered a more detailed “environmental impact statement.” While the Judge initially ordered that the DAPL be shut down until the environmental review is complete, the U.S. Court of Appeals for the District of Columbia blocked that decision and allowed the DAPL to continue operation until the review was complete.

The DAPL’s operator appealed to SCOTUS regarding the requirement that a more extensive environmental review was needed. The operator has long maintained that the pipeline is safe, and its lawyers argued that requiring a heightened standard of environmental review “would establish a novel precedent of breathtaking scope that could delay or thwart any number of other national infrastructure projects.” The Native American tribes opposed the appeal arguing that the DAPL should have never been approved from the get-go. Ultimately, SCOTUS declined to hear the case leaving the lower court’s decisions intact.

Our firm has extensively blogged about pipeline-related lawsuits and currently represents a number of property owners confronted with such issues. Some of our prior blogs on the topic can be found here:

PennEast Pipeline Prevails Because State Consented to Taking Under the “Plan of the Constitutional Convention” in 1787.

Mostly recently, in Penneast Pipeline Co. v. New Jersey, 141 S. Ct. 2244 (2021), the Supreme Court held that the Federal Government can constitutionally confer on pipeline companies the authority to condemn necessary rights-of way in which a State has an interest. As with any eminent domain issue, our McKirdy, Riskin, Olson & DellaPelle, P.C. has the experience and expertise to counsel you through these difficult and confusing situations. Please contact us for a free consultation with an experienced attorney.