Eminent Domain in a Nutshell 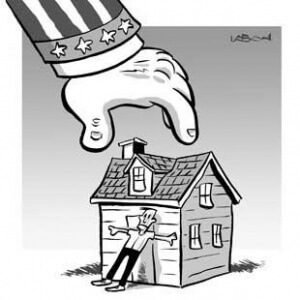 Eminent domain has two different manifestations.  Most exercises of eminent domain involve takings initiated by government agencies or, in some cases, public utilities such as power or pipeline companies, of privately owned property. This often entails the seizure of land and buildings, as well as the creation of easements and other interests in property. According to the Takings Clause of 5th Amendment to the United States Constitution, a government entity must satisfy two conditions in order to use its eminent domain power— (1) the land must be taken for public use, and (2) the owner must receive just compensation.

Clearly, our Founding Fathers understood the need for eminent domain. Without it, how would we build roads, bridges, or hospitals? As originally intended, eminent domain was meant to provide the government the ability to take private property in order to build something for public use, such as a public school, a town hall, or a park.  Over the years, however, debates have emerged questioning the interpretation of the phrase “public use”.  Could public use include projects that encourage economic development, and could the government seize property and sell it to private parties such as developers? In 2005, the U.S. Supreme Court made a landmark decision in Kelo v. City of New London, which involved the efforts of a Connecticut city to undertake a local “redevelopment” project by seizing privately owned property and turning it over to private redevelopers who would then build new buildings with commercial and residential uses, where homes used to exist. After years of contention, the Court ruled that economic development could be a legitimate and legal reason to use eminent domain, provided that the laws of the state in question permitted takings via eminent domain for these purposes. While many states have since passed eminent domain reform laws to restrict the ways in which eminent domain may or may not be used, municipalities and states across the country continue to use eminent domain to redevelop “blighted” areas.

Additionally, the concept of just compensation remains an important issue. After all, if the government always offered property owners fair market value for their properties, firms like McKirdy, Riskin, Olson & DellaPelle, which represent property owners in eminent domain disputes, would likely not have been in existence for decades. Examples of some of the just compensation awards our firm has obtained for its clients are available on our “Case Studies” page.

While eminent domain is a lawful and necessary governmental privilege, it remains clear that this awesome power is not always used appropriately. As a property owner, it is crucial for you to know your rights so as not to become a victim of eminent domain abuse. If you think that your property is going to be taken or the government has entered onto your property without proper compensation, it is imperative to seek experienced counsel to advise you of your potential legal rights and remedies.

The author acknowledges the assistance of William Olson, a law clerk at McKirdy, Riskin, Olson & DellaPelle, in preparing this article. Mr. Olson is a member of the class of 2021 at Rutgers Law School.