Number 1. Monongahela Navigation Co. v. United States, 148 U.S. 312 (1893). A grand-daddy in its 130th anniversary year! A bountiful feast of elemental principles of just compensation – I try to read it once a year. 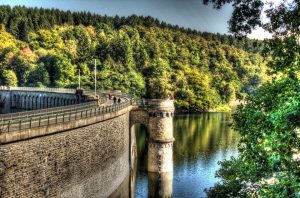 “The question presented is not whether the United States has the power to condemn and appropriate this property of the Monongahela Company, for that is conceded, but how much it must pay as compensation therefor. Obviously this question, as all others which run along the line of the extent of the protection the individual has under the constitution against the demands of the government, is of importance, for in any society the fullness and sufficiency of the securities which surround the individual in the use and enjoyment of his property constitute one of the most certain tests of the character and value of the government. The first 10 amendments to the constitution, adopted as they were soon after the adoption of the constitution, are in the nature of a bill of rights, and were adopted in order to quiet the apprehension of many that without some such declaration of rights the government would assume, and might be held to possess, the power to trespass upon those rights of persons and property which by the Declaration of Independence were affirmed to be unalienable rights.”

The owner’s evidence at trial was that “in view of the present and prospective tolls receivable at lock and dam No. 7, the present value of said lock and dam No. 7 is not less than $450,000, said value being predicated upon said present and prospective tolls.”  The trial court awarded $209,000, ‘not considering or estimating in this decree the franchise of this company to collect tolls.’

I will let you read (or reread) the entire opinion, but one important principle is that Congress’ “supreme power” to regulate interstate commerce (remember Gibbons v. Ogden?) is “subject to the limitations imposed by this fifth amendment, and can take only on payment of just compensation.”

The Court’s “conclusions are, that the navigation company rightfully placed this lock and dam in the Monongahela river; that with the ownership of the tangible property, legally held in that place, it has a vested franchise to receive tolls for its use; that such franchise was as much a vested right of property as the ownership of the tangible property; that the right of the national government, under its grant of power to regulate commerce, to condemn and appropriate this lock and dam belonging to the navigation company, is subject to the limitations imposed by the fifth amendment, that private property shall not be taken for public uses without just compensation; that just compensation requires payment for the franchise to take tolls, as well as for the value of the tangible property; and that the assertion by congress of its purpose to take the property does not destroy the state franchise.”  Remand for new trial.

WOW – what a win! (maybe we should send a copy of the opinion to all sitting Justices?)