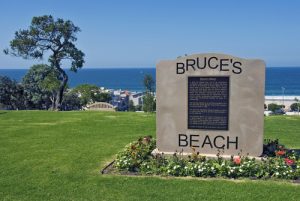 The property, widely known as Bruce’s Beach, was originally bought by Willa and Charles Bruce in 1912 and quickly became a thriving retreat in Manhattan Beach for African American beachgoers. Bruce’s Beach was the only beach in the area that was owned by and operated for African Americans to escape the pervasive racial harassment and violence. Unfortunately, this idealized vision was incompatible with the racist beliefs of the time and many beachgoers still experienced violence at the resort in the form of flattened tires and attempted arsons. By the mid-1920s, the Manhattan Beach Board of Trustees sought to take two blocks of city land using the power of eminent domain and raising the public need for a local park. The Bruces’ property fell within the proposed taking area, as well as lots owned by four other African American families, and nine white landowners. In the later 1920s, the Court rendered final judgement permitting the taking, and the Bruces were paid $14,500 in compensation for the property. Shortly thereafter, the Bruces retired from the hospitality industry and moved out of Manhattan Beach. Charles died in 1931 and Willa died in 1934.

After the taking of the Bruces’ property, the area laid vacant for decades. Sometime in the 1960s, a small park was finally constructed on a portion of the property. Title to the Bruces’ former parcels also changed hands several times over the years: from Manhattan Beach, to the State of California, to Los Angeles County. Currently, a Los Angeles County lifeguard training center is located at the former site of Bruce’s Beach.

In 2020, the property’s troubled history gained widespread public attention following the George Floyd protests. California State Senator Steven Bradford introduced a bill in early 2021 to authorize the return of the property to the Bruce family descendants. The bill passed the California Legislature in early September and was signed into law by Governor Newsom by the end of that month. However, in early November 2021, a local L.A. attorney filed a lawsuit alleging that the return of the property is unconstitutional. The lawsuit contends that taking was a valid exercise of Manhattan Beach’s eminent domain power and that the public purpose was fulfilled by the construction of a park on the property. In sum, the lawsuit disputes the facts that led to the passage of the bill authorizing the return of the property. As of the date of this blog post, the property has not yet been transferred back to the Bruce family and the lawsuit seeking to prevent the transfer is still pending in court.

While it is extremely difficult to comprehend history when scrutinizing it through a modern lens, it important to acknowledge several legal protections that are now available to safeguard against a pretextual taking like in the Bruce Beach case. Specifically, certain New Jersey development authorities are required to submit evidence-based assurances that proposed plans will be implemented in the reasonably foreseeable future. New Jersey Courts have held that these condemning authorities lack the discretion to take property for future public use unfettered by court consideration of whether or when the proposed redevelopment will occur. See Casino Reinvestment Dev. Auth. v. Birnbaum, 458 N.J. Super. 173, 193-94 (App. Div. 2019) (involving the Casino Reinvestment Development Authority). Additionally, condemnors in New Jersey may not act in bad faith and abuse their power to condemn when attempting to take a parcel of land in order to prevent an owner from operating a particular business on the property. Such action constitutes unlawful pretext and warrants overturning a decision to condemn. Although the legal and social climate of 1920s California is drastically different than New Jersey today, these modern policies (had they been available) may have potentially saved the Bruce’s property from the get-go. If you believe your property is being wrongfully taken by a condemning authority, please contact McKirdy, Riskin, Olson & DellaPelle, P.C. to speak with an experienced condemnation attorney.

As a side note, this matter has been the subject of considerable attention in the media since 2020. These are a few interesting stories: “Bruce’s Beach to be returned to Black family 100 years after city ‘used the law to steal it”; “Lawsuit arguing constitutional overreach seeks to stop Bruce’s Beach land transfer”; “Manhattan Beach was once home to Black beachgoers, but the city ran them out. Now it faces a reckoning.”