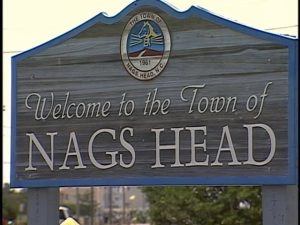 A recent decision by the U.S. Court of Appeals for the Fourth Circuit (Zito v. North Carolina Coastal Resources Commission) addressed whether a Fifth Amendment takings claim against the North Carolina Coastal Resources Commission (the “Commission”) is barred by State sovereign immunity. The Pacific Legal Foundation, an organization that has successfully argued many property rights cases before the U.S. Supreme Court (i.e., Knick v. Township of Scott), argued the case on behalf of the property owners.

In 2008, plaintiffs purchased a beachfront house and lot in South Nags Head, North Carolina. The subject property is located on one of North Carolina’s barrier islands, which is a system of narrow islands that run along the state’s coast. Between 2008 and 2016, plaintiffs used the house as a vacation home and rental property. But tragically, on October 10, 2016, the house caught fire and burned to the ground. Following the fire, plaintiffs sought to rebuild the house on the same lot.

Given its location, the subject property is governed by North Carolina’s Coastal Area Management Act (“CAMA”). One of CAMA’s goals is “[t]o [e]nsure that the development or preservation of the . . . coastal area proceeds in a manner consistent with the capability of the land and water for development, use, or preservation based on ecological considerations.” N.C. Gen. Stat. § 113A-102(b)(2). To do so, CAMA requires coastal property development to be set back a certain distance from the vegetation line—the first line of natural vegetation which marks the boundary between the beach and more stable land. These setback requirements protect property owners from coastal storms and encroaching waters, while also preventing disturbance to the beaches and dunes. Under the state statute, buildings with less than 5,000 square feet must be set back a distance at least 60 feet or 30 times the local rate of erosion, whichever is farther. However, buildings of less than 2,000 square feet built before June 1, 1979 fall under a grandfather provision, requiring the property to be set back only 60 feet from the line of vegetation. Though the subject property qualified for the grandfather provision, it failed to satisfy the 60-foot setback limit. In fact, the property was only set back only 12 feet from the vegetation line.

To enforce its set-back regulations, CAMA requires a permit for property development that will affect any area regulated by the statute. Plaintiffs applied for a permit from the Town of Nags Head. The Town’s local permit officer denied the application because the property did not meet CAMA’s setback requirements. Plaintiffs then filed a petition for a variance with the Commission. After considering the petition at a public hearing, the Commission issued a final agency decision denying the variance in late 2018. When plaintiffs were notified of the denial, the Commission also informed them of their right to appeal the decision in North Carolina Superior Court. Plaintiffs sued directly in federal court, claiming that the State deprived them of the value of their property and committed an unconstitutional taking under the Fifth Amendment. The District Court granted the State’s motion to dismiss for lack of subject matter jurisdiction due to the state immunity from suit in federal court. Plaintiffs appealed to the Fourth Circuit.

The Fourth Circuit began its analysis by stating that “sovereign immunity” under the Eleventh Amendment generally protects states from being sued in federal court. Notwithstanding this general rule, the Court noted that there are six recognized scenarios where the State surrenders sovereign immunity:

(1) when a State consents to suit; (2) when a case is brought by the United States or another State; (3) when Congress abrogates sovereign immunity pursuant to Section 5 of the Fourteenth Amendment or pursuant to the Bankruptcy Clause; (4) when a suit is brought against an entity that is not an arm of the State; (5) when a private party sues a state official in his official capacity to prevent an ongoing violation of federal law; and (6) when an individual sues a state official in his individual capacity for ultra vires conduct.

Plaintiffs in Zito argued in favor of an additional scenario: when a takings claim is brought in federal court, regardless of the remedies available in state court. Broadly speaking, plaintiffs argued that the Supreme Court’s ruling in Knick v. Township of Scott (2019) abrogated the rule applying state sovereign immunity in federal court if state courts are open to hearing a Takings Clause claim.

The Court disagreed with the plaintiffs and noted that the Takings Clause does not provide a blanket exception to sovereign immunity. Specifically, the Court held that the Supreme Court in Knick did not address state sovereign immunity, as that case involved a lawsuit against a town. Municipalities, unlike States, do not enjoy a constitutionally protected immunity from suit. Nevertheless, the Court acknowledged the apparent conflict between sovereign immunity doctrine and the Takings Clause. Instead of chipping away at the scope of sovereign immunity, the Court deferred to precedent and found that, absent one of the six aforementioned exceptions, federal courts will not hear a takings claim against a state, provided that the state’s own courts are open to adjudicate the matter. The Court noted that if a state court will not hear the case, then a federal court will in order to protect the individual interests involved.

Moreover, the Court proceeded to consider whether North Carolina courts remain open to adjudicate plaintiffs’ takings claim. The Court concluded that, because the North Carolina Constitution provides an independent cause of action for plaintiffs to seek damages for a taking, it permits these plaintiffs to pursue damages after establishing that the Commission’s action constitutes an unlawful taking of their property without compensation. Therefore, in affirming the district court’s dismissal, the Court held that North Carolina’s courts remain open to hear plaintiffs’ takings claims and sovereign immunity bars claims against the State in federal court.

The Fourth Circuit’s decision is noteworthy because it provides additional appellate insight into the scope of Knick v. Township of Scott, and the limitations of state sovereign immunity doctrine in the context of Fifth Amendment takings claims. By concluding that Knick did not abrogate State sovereign immunity in federal court, the Fourth Circuit aligned with other federal courts that have addressed the same issue. Additionally, practitioners should be acutely aware of the six recognized exceptions to state sovereign immunity if they intend to pursue a takings claim against a state in federal court. The Zito case also draws some parallels to the procedural posture of PennEast Pipeline Co., LLC v. New Jersey, et al., a case where the Supreme Court permitted a takings claim in federal court by a private pipeline company against the State of New Jersey, pursuant to Natural Gas Act, based upon the Court’s conclusion that the authorizing federal legislation specifically permitted that claim.

If you are confronted with a governmental taking and need guidance regarding the proper procedure to follow, please contact McKirdy, Riskin, Olson & DellaPelle, P.C. to speak with an experienced eminent domain attorney. To view the entire Zito v. North Carolina Coastal Resources Commission decision, click here.

More info about the petition is available on the Inverse Condemnation Blog authored by our colleague, Robert Thomas, here.