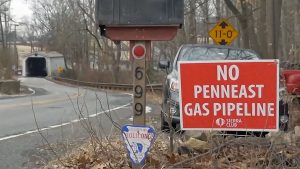 In a 5-4 decision issued yesterday, the United States Supreme Court answered the question “whether the Federal Government can constitutionally confer on pipeline companies the authority to condemn necessary rights-of way in which a State has an interest. We hold that it can.”  The full text of the opinion is here.

By way of recap, PennEast is a private pipeline company that applied to the Federal Energy Regulatory Commission (FERC) for a certificate of public convenience and necessity to construct a 100+ mile greenfield natural gas pipeline through the wilds of Pennsylvania and New Jersey.  In 2018, FERC issued the certificate to PennEast.  PennEast offered to purchase the necessary rights of way from the affected property owners.  A few of the properties along the route were owned by the State of New Jersey, and the State, Dep’t of Environmental Protection held “preservation easements” in about forty of the affected properties.  PennEast was unable to acquire all the necessary rights-of-way, so, in January 2019 it filed about 120 condemnation cases in the United States District Court naming property owners and the State, DEP as interested defendants.  Many property owners objected to the takings on various grounds and so did the State.  The State also argued that the District Court did not have jurisdiction because of the Eleventh Amendment.  The District Court rejected the property owners’ arguments against the taking and the State’s arguments and entered judgment allowing the takings and the project to proceed.

PennEast then petitioned the US Supreme Court for certiorari, and the High Court agreed to take the case.  Arguments were held this spring, leading to the issuance of yesterday’s decision and opinion reversing the Third Circuit’s opinion.  Chief Justice Roberts penned the majority opinion, which explained in simple terms the rationale of the Court’s holding:

“Although nonconsenting States are generally immune from suit, they surrendered their immunity from the exercise of the federal eminent domain power when they ratified the Constitution. That power carries with it the ability to condemn property in court. Because the Natural Gas Act delegates the federal eminent domain power to private parties, those parties can initiate condemnation proceedings, including against state-owned property.”  The statute at issue is the section of the Natural Gas Act that provides:

“When any holder of a certificate of public convenience and necessity cannot acquire by contract, or is unable to agree with the owner of property to the compensation to be paid for, the necessary right-of-way to construct, operate, and maintain a pipeline or pipelines for the transportation of natural gas . . . , it may acquire the same by the exercise of the right of eminent domain in the  district court of the United States for the district in which such property may be located, or in the State courts.” 15 U. S. C. §717f(h). (An interesting aside is that PennEast could have sued NJ in State court under the statute and there would, of course, be no 11th Amendment defense.)

“Turning to New Jersey’s sovereign immunity defense, we begin by discussing the federal eminent domain power. Since the founding, the Federal Government has exercised its eminent domain authority through both its own officers and private delegatees. And it has used that power to take property interests held by both individuals and States. Section 717f(h) is an unexceptional instance of this established practice.”

The Court looked far back in its precedential history to deny New Jersey’s challenge.  “In fact, this is not the first time New Jersey has tried to thwart such a delegation. In Stockton v. Baltimore & N. Y. R. Co., Justice Bradley, riding circuit, considered a challenge by New Jersey to an Act of Congress authorizing a New York corporation to build a bridge on state-owned land.  New Jersey sought an injunction, arguing [] that an out-of-state corporation [] could not take its land without its consent.  Justice Bradley dismissed these arguments, reasoning that “if congress, in the execution of its powers, chooses to employ the intervention of a proper corporation, whether of the state, or out of the state, we see no reason why it should not do so.  Justice Bradley also presciently noted that New Jersey’s position, if accepted, would give rise to the “dilemma of requiring the consent of the state in almost every case of an  interstate line of communication by railroad, for hardly a case can arise in which some property belonging to a state will not be crossed.”

The Court found that New Jersey had consented to be subject to the federal power of eminent domain (as a defendant in a lawsuit) when it ratified the Constitution.  “As the cases discussed in Part III show, the States consented in the plan of the Convention to the exercise of federal eminent domain power, including in condemnation proceedings brought by private delegatees. The plan of the Convention reflects the “fundamental postulates implicit in the constitutional design.”

In sum, “PennEast’s condemnation action to give effect to the federal eminent domain power falls comfortably within the class of suits to which States consented under the plan of the Convention.”  Therefore, the Judgment of the Third Circuit was reversed and the case remanded to the District Court “for proceedings consistent with this opinion.”

This decision could signal that the dozens of property owners who are affected by this project – more than 100 in New Jersey alone – will now proceed to have just compensation determinations made in the condemnation matters which had been stalled by the appeals.  The State has, however, vowed to fight on – “We still have other, ongoing legal challenges to this proposed pipeline, which is unnecessary and would be destructive to New Jersey lands,” Outgoing N.J. Attorney General Gurbir Grewal said in a statement. “I am proud to continue this fight on behalf of our residents, and I urge the federal government to take another look at this harmful proposal.” After announcing that he was proud to continue the fight, Attorney General Grewal announced later in the day that he was resigning from his position to take a federal position, so the fight will have to continue under the direction of his successor.