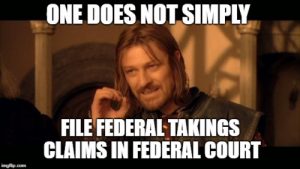 In Knick v. Scott, the United States Supreme Court will be analyzing a local ordinance adopted by the Township of Scott, Pennsylvania, which provides public access to cemetery properties. According to the ordinance, even if the cemetery is on private property, the property owner must allow public access onto the property to permit the public to visit the graves. Rose Mary Knick, who owns property which constituted a cemetery according to the ordinance, was prohibiting public access to her property. In 2014 Ms. Knick was issued two notices which charged that she was violating the ordinance. Thereafter, Ms. Knick filed an inverse condemnation case against Scott Township, alleging that the ordinance and its implementation constituted a taking under the Fifth Amendment of the United States Constitution.

While the facts of this case are certainly interesting, what makes it noteworthy is that Ms. Knick filed her inverse condemnation case in federal court, rather than litigating her challenge to a Pennsylvania town’s ordinance in the Pennsylvania state courts. The case was then dismissed from federal district court based on the holding in Williamson County Regional Planning Commission v. Hamilton Bank, 473 U.S. 172 (1985). Williamson County held that before a property owner can file a Fifth Amendment takings claim in federal court, there must first be an effort made for the issues to be brought before a state court. Therefore, Williamson County requires a litigant to try (and lose) a Fifth Amendment takings case in the state courts before a claim can be filed in federal court. Known as the “Ripeness Doctrine,” Williamson County creates a Catch 22 because a judicial resolution of a takings claim in a state court is likely to create res judicata of the issues thereafter presented to the federal court. As a result, under Williamson County, a federal court will not generally hear a takings claim unless it is “ripe” and has been first unsuccessfully litigated in in state court. But, if it is first unsuccessfully litigated in state court, the federal court may rely upon the decision of the state court to hold to hold that the issues have already been adjudicated! This quagmire has drawn the ire of many legal scholars and practicing attorneys over the injustice of losing an opportunity to protect yourself from government oversight which can result from the application of circular reasoning of Williamson County and other similar cases.

The pendency of the Knick case, as well as a widespread sense of futility amongst property rights advocates since Williamson County was decided in 1985, has led to eighteen amicus curie (friend of the court) briefs to be filed by parties interested in Knick once the High Court granted certiorari and agreed to hear the matter. All the amici briefs are well-written, but three stand out. One amicus brief was written by Congressman Steve King of Iowa, who is Chairman on the Subcommittee on the Constitution and Civil Justice, Committee of the Judiciary, and his colleague Kevin Kramer. The second brief was filed by the Institute for Justice, Owners Counsel of America, and Professor Daniel L. Mandelker (with the Institute for Justice known for arguing the last significant eminent domain case before the US Supreme Court, the Kelo v. New London, in 2005). The third brief was filed by the Office of the Solicitor General of the United States, filed on behalf of the United States Government. All three of these amicus briefs are aimed at having the Court overrule Williamson County in order to help preserve a property owner’s right to use the federal court system to adjudicate a Fifth Amendment taking claim. Each brief has a similar argument: that a citizen should have the right to bring his or her Constitutionally-protected Fifth Amendment right before a federal court, just as citizens who claim violations of other federally protected rights are able to litigate in the federal court system. Recently, it was announced that the oral argument will be heard by the Supreme Court on this case on Wednesday, October 3rd, 2018.

While no one can predict what the outcome of the Knick case may be, there are strong constitutional issues ad state. Excellent summaries about each amicus brief are available on the Inverse Condemnation blog authored by our Owners’ Counsel colleague Robert H. Thomas, available here.

If you want to read each brief for yourself, you can find them all, as well as case information, on the U.S. Supreme Court website here.

The author acknowledges the assistance of William Olson, a summer intern at McKirdy, Riskin, Olson & DellaPelle, in preparing this article.  Mr. Olson is a recent graduate of Catholic University and a member of the Class of 2021 at Rutgers Law School.