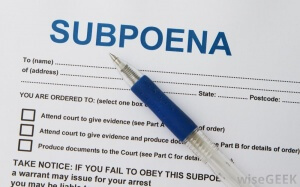 In the context tax appeals, municipalities and taxpayers will often bump heads about the disclosure of an appraisal report prepared by a mortgage lender.  Although these reports cannot be utilized at trial for determining the market value of the property in a tax appeal, municipalities may still demand the taxpayer to disclose the report.  This was the point of contention in Elizabeth City v. 850 West Grand Realty, LLC wherein the City filed an affirmative appeal at the Tax Court presumably arguing that the subject property was underassessed for tax year 2015.

At some point, either by way of discovery or by other means, the City became aware of two recent financing transactions by the taxpayer.  In light of this finding, the City issued two separate subpoenas on the lender, Capital One, N.A., seeking production of the lender’s appraisal reports in connection with both the 2011 and 2015 mortgages.  In addition, the City also sought the income and expense statements and rent rolls associated with the subject property that was submitted to the lender in preparation of the 2011 and 2015 appraisal reports.  Defendant subsequently filed motions to quash both subpoenas.

Unlike in criminal matters, the scope of pre-trial discovery in civil matters are much broader.  As noted by the Tax Court, citing to the Court Rules, the “relevancy of documents and materials is not predicated upon its admissibility at trial, instead it is founded upon whether the information sought is reasonably calculated to lead to admissible evidence respecting the cause of action or its defense.”   In a tax appeal context, the court’s purpose is to make a determination of the true market value of the subject property as of the relevant valuation date.  In the instant matter, the valuation date would be Oct. 1, 2014.

With respect to the 2015 appraisal report, the Tax Court made a determination that the valuation date of the appraisal report was in close proximity to the Oct. 1, 2014 valuation date.  The taxpayer argued that the report should not be discoverable since it would not be admissible at trial.  Nonetheless, the court concluded that the 2015 report fell within the scope of permissible discovery because it “contains information about the subject property which is directly relevant to its true market value and may reasonably lead to the discovery of admissible evidence.”  The Tax Court, however, granted the taxpayer’s motion to quash plaintiff’s subpoena seeking the 2011 appraisal report on grounds that the valuation opinion expressed therein was too remote from the relevant valuation date of this appeal.

The court also addressed taxpayer’s argument that the municipality must make a showing of exceptional circumstances to obtain the 2015 report pursuant to R. 4:10-2(d)(3).  R. 4:10-2(d)(3) permits a litigant to “discover facts known or opinions held by an expert who has been retained or specially employed by another party in anticipation of litigation or preparation for trial and who is not expected to be called as a witness at trial, only upon a showing of exceptional circumstances under which it is impractical for the party seeking discovery to obtain facts or opinions on the same subject by other means.”  The court held, however, that “the 2015 Appraisal Report is not an expression of the opinions held by an expert of plaintiff or defendant that is not expected to be called to testify at trial under R. 4:10-2(d)(3).”

Under similar rationale, the Tax Court concluded that Capital One, NA was not required to furnish the 2011 and 2015 income and expense statement and rent rolls.  The taxpayer provided the income and expense statement, and rent rolls in its answers to interrogatories pursuant to court rules.  However, the City sought the information that was supplied to Capital one, NA for the same time period so the City can “either confirm or refute his suspicion that they are identical.”   Needless to say, the Tax Court determined that “plaintiff’s counsels’ mere curiosity is not enough to warrant intrusion into the lines of communication and disclosure of financial information made by defendant to its mortgage lender. . .”  Moreover, the discovery that the City seeks is duplicative information which the taxpayer has already provided.  In regards to the 2011 income and expense statement, the court also found that it was “too far removed to provide meaningful and relevant information.”

The Tax Court’s full opinion can be read here.