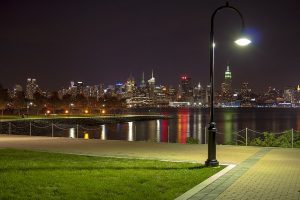 While not a condemnation case per se, the Supreme Court’s May 5th Opinion in Shipyards Assoc. v. Hoboken may be useful in a future valuation case. In short, the owner rec’d approvals in 1997 for residential development of its waterfront property in Hoboken.  They build most of the project in conformity with its approvals, except for several tennis courts.  In 2011, Shipyard filed an application to amend its site plan approval to replace the tennis facilities with two eleven-story residential towers.

Hoboken attempted to block those efforts on several different avenues. It opposed DEP permits; filed suit to compel construction of the tennis courts; and the Planning Board denied the site plan approval application without hearing.  Shipyard filed suit claiming automatic approval under Municipal Land Use Law caused by municipalities failure to act as of July 2012. The trial court agreed with Shipyard. Appeals followed.

Then, with the appeals pending, in late 2013, Hoboken passed two Ordinances, one of which was a “zoning ordinance adopted pursuant to the MLUL. Z-264 provides, in pertinent part, that “no new construction or substantial improvement of existing structures shall be permitted on piers or platforms projecting into or over the Hudson River or Weehawken Cove.”

The procedural history is a bit complicated, but the Appellate Division held that the zoning ordinance was subject to MLUL Section 52(a)’s “insulation of a project for two years from changes in the zoning law.” (Slip op. at 11).

The Court framed “two discrete questions of law: Is Z-263 a zoning ordinance subject to the MLUL; and, if so, does Section 52(a) contain an exception for retroactive application of changes in zoning requirements relating to public health and safety to projects that have obtained final approval?” Answers:

Yes, it is a zoning ordinance, and no, “we find no reason to import an exception into Section 52(a)
where the Legislature did not provide one.”

Construing a statute as written and enforcing an automatic approval under the MLUL. Strange days indeed.