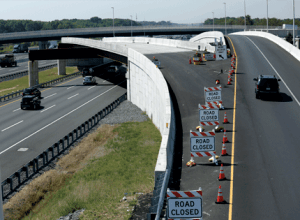 The Tax Court of New Jersey recently issued a ruling resolving a property tax exempt dispute concerning approximately 400+ acres of land in Monroe Twp. purchased by the New Jersey Turnpike Authority (“NJTA”).  As some may be aware, the NJTA has been involved in a project to widen and reconfigure a portion of the Turnpike from interchange 6 to interchange 9 during the past few years, and some work continues to this day.  When the widening project wasfirst contemplated, it was determined that the project would temporarily and/or permanently impact certain environmentally protected areas.  Therefore, prior to the commencement of the project, the NJTA had applied and was approved for permits by the NJDEP, which allowed the disturbance of these environmentally protected areas (i.e., wetlands, riparian zones).  However, the approvals were conditioned upon NJTA’s ability to mitigate f

or the loss of ecological value from the permitted disturbances.  To that end, the NJTA purchased a 400+ acre site in Monroe Twp. for wetland and riparian mitigation, and donated almost all or at least a large majority of the 400+ acre site to the NJDEP for conservation by a way of a permanent easement.

Pursuant to N.J.S.A. 54:4-3.3b, upon acquisition of 400+ acres, the NJTA provided a letter to Monroe’s tax assessor and tax collector notifying them of the purchase and to mark the property exempt on the Township’s tax records at the end of the tax year.  Initially, the Township complied and granted a tax exemption to the site for tax year 2011.  However, for tax years 2012 and onward, the Township removed the subject property from the tax exempt list and placed it back on its tax rolls.  After issuing multiple tax delinquent notices to the NJTA and denying its exemption, the NJTA filed an appeal to the Tax Court for tax years 2013, and 2014.

The Tax Court’s ruling hinged on the interpretations of N.J.S.A. 54:4-3.3b and N.J.S.A. 27:23-12.   N.J.S.A. 54:4-3.3b grants tax exemption of property acquired by the State or by a State agency.  However, based on the New Jersey Supreme Court’s precedent, property “not now in the public use or presently intended for public use is taxable even when owned by bodies [such as the Turnpike] having a right to tax exemption with respect to property used for an appropriate purpose.”  See N.J. Turnpike Auth. v. Twp. of Washington, 16 N.J. 38 (1954); see also Twp. of Holmdel v. N.J. Highway Auth., 190 N.J. 74 (2007) (“it is unconstitutional to award tax exemptions simply because a government agency owns the subject property.”).  Therefore, the Tax Court interpreted the NJTA’s enabling statute, N.J.S.A. 27:23-12, to be “construed in the conjunctive” of the constitutional mandate that all property be assessed for tax uniformly and thus should be read to apply “to property acquired for turnpike purposes and, having been so acquired, used for such purposes, or held with the present design to devote it within a reasonable length of time to such use.”

In the end, the Tax Court found that the NJTA satisfied all the statutory requirements of receiving tax exemption on the subject property.  There was no dispute as to the fact that the NJTA is a government agency of the State.  Furthermore, based on the evidence before the court, the NJTA’s acquisition of the 400+ acre site was “solely for the purposes and in furtherance of the Widening Project.”  In the court’s perspective, the causal connection between the NJTA’s acquisition of the site for mitigation and its decision to grant a permanent easement to the NJDEP for conservation was a direct result of the highway widening project.  Therefore, tax exemption was granted for tax years 2013 and 2014.  However, given that no appeal was filed for 2012, the court did not grant an exemption for that particular tax year.  The court stated that it was undisputed that an appeal was not filed for 2012 and thus it “deprives this court of subject matter jurisdiction even if the claim is that the property or plaintiff is statutorily tax exempt.”

A copy of the Tax Court’s published opinion can be read here.

If you have any questions about a property tax issue, please feel free to contact us at 973-539-8900 or click here to schedule a free consultation.