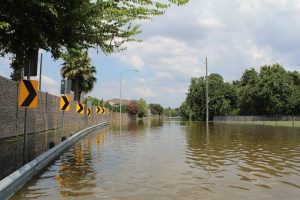 A Texas Court recently awarded six “upstream” property owners affected by flooding during Hurricane Harvey (August 2017) $550,000. See Landmark Research summary 2022-11-8 Compensation for Army Corps Flooding – Hurricane Harvey.  During Hurricane Harvey, the Addicks and Barker Flood Reservoirs created by the Army Corps of Engineers filled with water and caused widespread damage to approximately 10,000 – 12,000 homes upstream from the reservoirs before Army Corps opened the Flood Gates.   The owners claimed that the Army Corps reservoirs were designed to fill and then flood upstream and therefore the Corps intended the flooding to occur.  Indeed, the Texas Court held that the flooding events were “takings” in 2019.

Avid readers will remember that – a decade ago – the United States Supreme Court held:  “We rule today, simply and only, that government-induced flooding temporary in duration gains no automatic exemption from Takings Clause inspection.” Arkansas Game and Fish.  The Texas Court’s decision would appear to fit within the Arkansas Game holding.

A copy of the U.S. Court of Federal Claims opinion, issued October 28, 2022, is available here.

So, the “floodgates” have opened for homeowners to file suit against the Army Corps of Engineers.  Based on the test case award of compensation, it is estimated that over $1.6 billion in compensation claims may arise out of the upstream owners’ cases.  That does not include any compensation for the downstream owners whose properties were also intentionally flooded when the gates were opened.

For any property owner adversely affected by flooding, remember, a statute of limitation’s clock is likely ticking.  As a result, any affected owner should promptly seek experienced condemnation counsel to assist, and news reports have indicated that affected owners have until August 2023 to file their claims.