Trials in the Age of COVID/SARS-2

Home » Condemnation Law » Trials in the Age of COVID/SARS-2 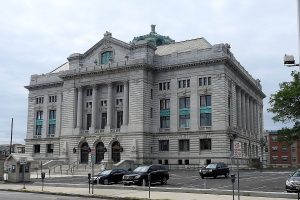 As most New Jersey trial lawyers would know, ^ is a picture of the Hudson County Courthouse, which was built over a century ago. (click here for a detailed history of the building by jerseydigs).  It is one of the most impressive and beautiful courthouses in the entire State.  It was renamed the William J. Brennan, Jr. Courthouse in 1988 (the year I graduated high school).  Brennan, was, of course, an Associate Justice of the United States Supreme Court after serving on our State Supreme Court.  I will always remember the inscription above the front door:  “Precedent Makes Law; If You Stand Well, Stand Still.”  It is very hard for a lawyer to stand still, especially in a courtroom.

I have always liked going to the Brennan Courthouse.  Perhaps because my father – who is also a lawyer – clerked there at the beginning of his law career in 1964/65.  I digress.

The purpose of my post is to comment on the proposal to proceed with virtual trials.  Or, maybe it’s to complain about the plan to proceed with virtual jury trials.  Last month, a Notice to the Bar was posted for comment on the judiciary website – here.  I am a trustee of the Morris County Bar Association, and the leaders of our Civil Practice Committee circulated and submitted detailed comments in response to the Notice to the Bar.  I applauded their work.

Returning to the Hudson County Courthouse.  I appeared before the Presiding Chancery Judge there in late February of 2020.  Little did I know that would be my last in-person Court appearance for a very long time.   The Judge came onto the bench – and greeted counsel with a hand-shake and then proceeded to hear oral argument.  A familiar custom and practice for the last century in those hallowed halls.  I prevailed that day in court – probably not so much because of my Darrow-esque oral argument – but a win’s a win.

Two weeks later, the Brennan Courthouse was closed.  And nine months later, the judiciary is talking about VIRTUAL jury trials!

In September (2020), seven months later, I returned to the Brennan Courthouse for a bench trial (R. 401 hearing) with live witness testimony.  It was great to be back in the Courthouse again albeit while wearing a mask and not standing close to my client or opposing counsel.  Here’s the true point of my story.  When a witness is required to appear in Court; Step-up into the witness stand; Get sworn-in sitting next to a judge in a black-robe (even if six feet askance), and be confronted with cross-examination by counsel – SOMETHING happens to that person and candor usually prevails.  I liken the courthouse witness box to a truth-telling machine.

My experience tells me that witnesses are only affected when all elements are in place.  It’s not the same when a witness is sworn-in and presents testimony at a deposition, or at a mediation (called a Commissioners’ Hearing in my field), or before a governmental body (i.e. planning board).

At least historically, Courthouses were designed to impress and intimidate. (I remember being in awe in the United States Supreme Court chamber).  How can one not be impressed(or intimidated)? 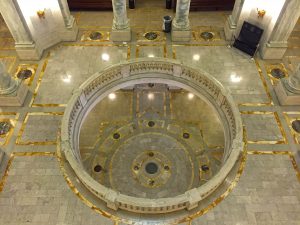 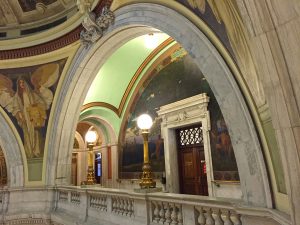 That “truth-telling” phenomenon is only amplified when there is a jury staring at the witness.

I can’t prove the distinction between in-person in-Court proceedings versus out of Court or virtual proceedings.  But, I cannot in good conscience consent to a lesser “virtual” proceeding when I am duty-bound to zealously represent my clients’ interests.  I certainly appreciate that my clients’ rights and interests are not best served by no trials proceeding.  I am hopeful that in-person bench trials will proceed swiftly now that vaccines are being doled out with all deliberate speed, and am optimistic that we will be able to represent our clients’ interests before a jury of their peers in a Courthouse.

In sum, I miss being in the courthouse advocating for my clients before a Judge and opposing counsel.